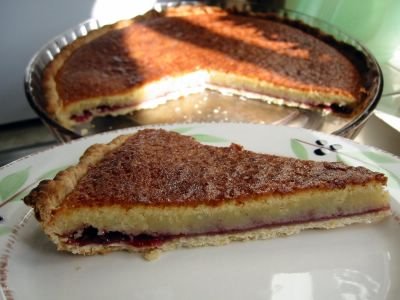 St. George's Day is celebrated every 23rd of April in England where Georgie boy is the patron saint. Why he was made one? A legend had it that he skewered a large lizard. I don't know if he barbecued it with sauce on the side. Obviously, it's not as widely celebrated as St. Patrick's Day of Ireland. In fact, a lot of people hardly remember or know when it is or whether to celebrate it at all. Besides a few English flags in pubs you could hardly see much evidence of the event. Although in my former company our CEO was a diehard Englishman that we were 'gently' coerced to wear red and whites on the day and our offices decorated with red and white flags and buntings.

Sam of Becks & Posh sought to redress the problem by teaming up with Monkey Gland of Jam Faced to host a one-time blog event of What's For Pud? Traditional British food is not renowned for its popularity or sophistication but the puddings (desserts, puds, afters) are something else. My own personal favourite is the Sticky Toffee Pudding. Among the store bought ones, Marks & Spencers comes up trumps in my book. Really really delish and so satisfying. I wanted it to be my entry but I wasn't sure if it's English or where exactly it originated. Then I pondered on Sussex Pond but I don't want to go steaming for 3 hours! So to be safe I chose another favourite that I am sure is from England.

As the name suggests, Bakewell Tart originally came from Bakewell, Derbyshire - that's Mr. Darcy's home county mind you. I've visited that town a decade ago, too long ago that I could hardly remember what it looked like except that it's near that beautiful pile of a house called Chatsworth. I tried to delay posting this with a plan to visit the Peak District and Bakewell a week ago during the school term break so I could have some really attractive pictures of the town. But the family car died and we couldn't make the 4-hour drive. Such a shame. :(

The tart was originally known in the form of Bakewell Pudding which according to legend has been in existence as far back as the 1500s. The more recent history of it tells of a mistake (like the Tarte Tatin) in the kitchen of the White Horse coaching inn when an inexperienced cook mistook the instructions for a strawberry tart. Instead of putting the egg and sugar in the pastry, it was poured on top of the jam which was on an obviously plainer crust thus accidentally creating this delightful dessert (or tea fodder depending on your inclination).

Anyhow, the tart is a thin layer of raspberry or strawberry jam on a shortcrust pastry with almond cake on the next layer then topped with icing. I really do not fancy the icing, in fact whenever I eat a shop-bought one I scrape it off completely so I just omitted it this time so as not to prolong the start of my enjoyment of it.

Just look at that nice sliver of tart above, a lovely meld of the raspberry jam and almond based cake. The addition of orange and lemon zests was a brilliant idea of Brian Turner from whose book, Favourite British Recipes, I adapted my lovey-dovey delish tart. 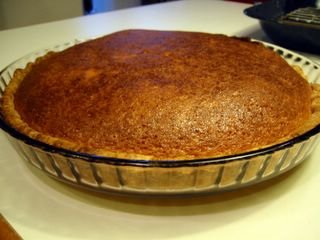 All puffed up just out of the oven.

Tagged with: What's For Pud? and St George's Day
Posted by celia kusinera at 9:57 pm

Email ThisBlogThis!Share to TwitterShare to FacebookShare to Pinterest
Labels: pies